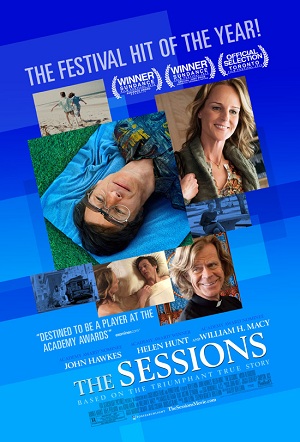 There was a quote from the film that I almost used for this review that goes something like this: “Then afterwards there was this moment; this glimpse of an awful sadness to come.” This line encapsulates all that I’d hoped this movie would be. As it is, the excerpt quote above captures what the film actually is much better: it’s an indie dramedy with a gawky sense of humor. The lead character, Mark, is a likable man as a victim of polio but not nearly as compelling or deep as the film pretends he is. He’s basically a paralyzed dude that wants to get laid and who has an appealing sense of humor and wit about it. There are a few awful comedic moments such as when the priest mentions that he’s heard that even non-believers say “oh god” during sex. Rather unoriginal. Also, it’s dorky to think that the motel desk attendant hears the phrase “simultaneous orgasm” like it’s a foreign language. Oh, ha. Insert knee-slap here. Further among my list of complaints is a barely passable (Boston?) accent by Helen Hunt. It’s distracting since it seems to come and go from line to line. In the end, the story lands well as it’s ultimately about the meaningful relationships Mark has cultivated with women. It’s beyond sex, but the script plays like it’s just sex and jokes for the first half so there is little inclination that there will be much of substance here. However I’m glad I stuck it out because it finishes strong and hints at some subtle truths about meaningful human connection.