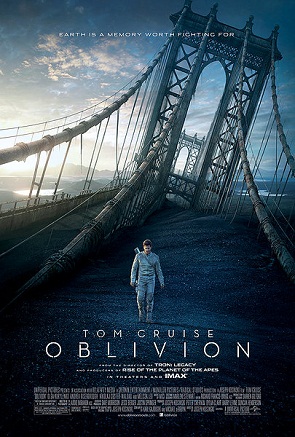 The mystery isn’t neatly folded and the sci-fi bits are more for show than significance, but Oblivion still manages to be a fun, albeit waning thrill-ride.

In Long
The movie opens on a foreign Earth full of excitement and suspense. As such this is a very pretty pop-film. But when the action begs for some explanation in the second act, it slows to a drag. Almost like it’s unsure how to unpack the mysteries behind the story, like it’s stepping carefully through a minefield. Unfortunately, it makes it through unscathed and we’re bored as a result. The partial reveals aren’t nearly enough nor delivered with the proper spacing to keep interest. It’s all action, then all plot detail, then back to all action.

The dialogue is a bit careless and corny. I know. Tom Cruise? Corny? It kills the mood from time to time (see quote above for ultimate climax killer), but usually there’s enough residual momentum built up to keep things moving along. Also, the score helps here immensely. Gotta love M83’s work.

The visuals and special effects are spectacular. It’s truly amazing what can be done with computers in terms of creating environments and sets. If there’s one thing director Joseph Kosinski excels at, it is the breathtaking worlds he builds.

My chief complaint with the script is that it under-explains what actually happened with the war. Most of the details are inferred by the time the credits roll, but in the interest of connecting the audience better to the story it would have helped to have the history spelled out a bit more explicitly. Which leads me to another polarizing script choice. SPOLIER ALERT AHEAD. STOP IF YOU PLAN ON SEEING THIS MOVIE… I WARNED YOU. The idea that one of the many Tom Cruise clones can step in and fill the primary Tom Cruise’s shoes as a father — that cabin scene at the end is so Hollywood by the way — and a lover is shallow. It’s a slap in the face to real love. And if they wanted to make a philosophical statement about the nature of clones and individuality, they don’t even try to. And they shouldn’t. There isn’t the time nor is this the kind of movie for that. As they gloss over the important plot nuances and tidily wrap things up in a happily-ever-after bow, the ending of this one is hard to get behind as a thinking movie-goer.

On the surface this is one of my favorite genres so the potential for a great sci-fi experience was there. It needed more storytelling risks and plot innovation to fulfill expectations but instead opted for the usual drown-the-senses blockbuster fare.

While Oblivion isn’t close to as mind-blowing as The Matrix, which for a good portion of its runtime it’s trying hard to be, overall it’s a rewarding trip to the movies if you’re looking for diversionary entertainment. It’s fun and gorgeous to look at. You just wouldn’t want to take it home to meet the parents.