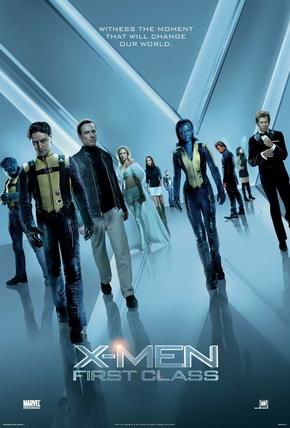 X-Men: First Class soars on its two wings, McAvoy and Fassbender, who deliver most notably in their ability to make mutants appear ironically very human.

X-Men: First Class isn’t exactly a reboot of the franchise although it is a return to form. As an origin story on the founding members of what would subsequently be named the X-Men it’s stylish and fun, much like Batman Begins or Spider-Man. As a superhero movie it works really well because it displays a handful of exciting montages of youth learning to harness their potential. The sentiment behind realized talent is one that flows through humankind’s collective heartbeat in such a way that it’d be hard to get this wrong.

Beyond the misunderstood outcast narrative, X-Men: First Class has all the action and excitement we have come to expect from a summer blockbuster. The acting is superb and the excellent cast brings authenticity to this resonant tale of friendship and the different paths we take. Finally, a Marvel comic film is imbued with the humanity that is often difficult to portray in characters easily cast aside as unrealistic mutations thereof.

But the real triumph of the movie is the relationship between Charles Xavier and Erik Lensherr, played by James McAvoy and Michael Fassbender, respectively. These two have respectable chemistry but it’s in their individual moments where they really command the screen. Both extremely capable actors, this movie succeeds in its dual-lead style due to their strong performances. Fassbender is especially remarkable as a young man with years of pent-up anger, but as engaging as he is as a latent villain with these serious and understandble issues, McAvoy is just as captivating as the incomparable leader of outcast youth. With his piercing insight into the abilities of his students and the creativity he shows in maximizing those gifts, he turns out to be an even more fascinating character study than his eventual rival.

For fans of the comics series and those who just want to get out of the summer sun and put back some popcorn in the air conditioning, X-Men: First Class is a great choice.