The Naked And Famous – Passive Me, Aggressive You || Music Review 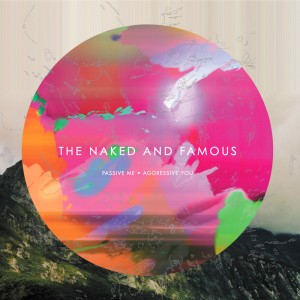 Passive Me, Aggressive You

Full of melodrama and bittersweet notions, Passive Me, Aggressive You is an exciting declaration of New Zealand’s The Naked And Famous. Channeling their musical heroes, they’ve crafted an eclectic mix of electro-pop and shoegaze moments in one even breath of youthful candor.

The first (charting) single from the album, “Young Blood” immediately reminds one of Passion Pit’s 2009 album Manners. The high-pitched vocals and upbeat bouncing electronics make this an easy and early winner. While its repetitive nature won’t make it a lasting favorite for many, it’s a great platform to the album.

“Punching In A Dream”

This second single is the strongest of the uptempo tracks. Relying on an electro-club groove and vocalise “ooo-ooo”s the pre-chorus section is easily one of the most powerful moments Passive Me, Aggressive You has to offer. It suffers from too much of a good thing in the end and could badly use a more varied bridge section. But for it’s sheer force and energy this song is one of The Naked And Famous’ best works.

Entering more creative territory, the group do their best to emulate Radiohead’s “Packt Like Sardines In A Crushd Tin Box.” This song would make a splendid opener but suits the flow of the album just fine as it sits. It’s a moody piece relying on blip and fuzz atmospherics and vocal chants.

“Frayed” displays the band’s rockier side, which they explore on various cuts throughout the album. It has a nice balance between electro and distortion with a deceptive drum beat, highlighted in a reverb-ed snare that avoids natural rock conventions. In an ode to post-hardcore and punk, singers Thom Powers and Alisa Xayalith end the song repeating their lines in a round, riddled with angst and melodrama.

Some will say The Naked And Famous are derivative copy-cats. While it’s true they sound like many things, they are more than just the parts that inspired the whole. Passive Me, Aggressive You represents a mosaic of sounds that came before.

It’s easy to pick out the influences: a little MGMT here, a touch of Passion Pit there, some vocals a la The xx, or even their Muse (circa Origins Of Symmetry) imitation on “A Wolf In Geek’s Clothing.” I’d even say their heavy reliance on echo and reverb allude to the 80s indulgences of French band M83. But in a debut LP this is to be expected. All musicians have influences, the smart ones just learn to hide them as they progress. What’s at stake here is whether it works. The important question is: “does it sound good?”

Yes, The Naked And Famous show their youth, their inexperience, even their immaturity. But with it comes the bravado of not knowing any better. Their naiveté is their strength. It affords them the audacity to pursue their music with reckless abandon.

The album fades a bit towards the end and would have benefited from some trimming in parts, and it’s likely that as they grow their art will only become more concise and concentrated. But put too many constraints on The Naked And Famous and the youthful exuberance that makes Passive Me, Aggressive You such an exciting debut will “tear at the seams.”