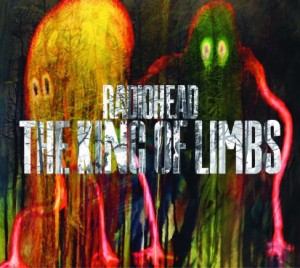 The King Of Limbs

The King Of Limbs is like nothing Radiohead has done before. It’s subdued and subtle, nearly void of any melody, yet a textured album overflowing with minutiae. Perhaps the most stubborn of the band’s releases it gives only as much as it receives.

[Since I previously did a track-by-track breakdown in my A First Listen post, I will use this space to review the two new singles Radiohead released on Record Store Day.]

It feels like a track from Thom Yorke’s solo album The Eraser but in all the right ways. With a “lazy triplet” groove and a sky full of blip clouds and synth-y raindrops, Yorke’s voice parts the canopy like a sweet sun ray.

The soundtrack to tribal stamping around a fire in a futuristic village, “The Butcher” is another beat-heavy, synth-laden trip down atmospheric lane. A song like this epitomizes present day Radiohead in that all of its subtleties can be overlooked, but the closer you peer the richer the detail.

At eight songs there aren’t very many chances for Radiohead to “redeem” themselves from the impression that these are simply b-sides from something more complete — or redeem themselves from their own weirdness for that matter — but as The King Of Limbs develops it becomes more direct.

Front-loaded with electronic ambient fantasies, they’ve set the groundwork for the “calm after the storm” of tracks like “Codex” and “Give Up The Ghost.” It nearly feels like two EPs separated by style and joined together by the long intro of “Lotus Flower.” Like two different sides of a cassette tape, Side A harkens back to the obscurity of songs on Amnesiac while Side B plays out like a more tranquil In Rainbows.

Thematically, The King Of Limbs has a reactive feel, much like Kid A did to the successes of OK Computer.  Yet with this 37-minute LP Radiohead appear to be reacting to an ever-sprawling social media environment by “bringing it in”, so to speak.  Going minimal.

Constantly on the hunt for reinvention, Radiohead is prone to erraticism and even Yorke-driven whimsy, but The King Of Limbs seems like a natural progression for the band at this juncture.  Electronica has always been where Thom Yorke’s heart is and he’s been dragging the band with him deep into its forest for years.  It’s only now that they’ve awakened surrounded by the minimalism of its cover.

Radiohead has earned the privilege to do what it wants. It’s further earned the respect to be viewed “innocent until proven guilty” in regards to its musical experimentations. This is because it has proven that not only can it do the straight guitar band thing with excellence (The Bends) but it can push the boundaries of rock in quite a spectacular way (Kid A). Therefore, we trust them to push the boundaries for us and teach us something new. As we have before, we must give them this permission with The King Of Limbs.

This sentiment should not be confused with favoritism or some sort of “self-fulfilling prophesy” — or logical fallacy wherein Radiohead makes great albums therefore all Radiohead albums are great — we must remember that it’s not just Radiohead who push the limits of what’s acceptable art rock and are nearly exhaustively praised for it. Plenty of more “indie” bands do the same and receive almost unanimous praise — (Deerhunter, Animal Collective, Dirty Projectors, TV On The Radio…). It’s just that Radiohead are by far the biggest and most popular. And lest we forget that before you have the freedom to deconstruct something you must have proven that you know how it’s put together, how it works. In that way we can trust the reassembly to be at the very least informed and, presumably, intelligent.

Now, the furor surrounding a subtle album like The King Of Limbs comes from the sense that it seems to be the new Radiohead’s M.O. to make music that is brainy and creative but not of the “reach out and grab you by the collar” sort. This notion fits the band’s personality of ducking the limelight so well that it’s a fair question whether they’ll ever pack a punch again, or if more mellow wanderings are their voice of choice from now on. Such a setting wherein we will always respect their art, but in which it will no longer be a place of much excitement.

While these apprehensions are possible they are just conjecture at this point because The King Of Limbs is still fascinating in its own way. In spite of lacking any real “destination” tracks it can yet be a “go-to” album if the mood implores. And in this context of electronic ambient art-rock, it’s quite a valuable work.  Outside of this context its significance can be lost.  But the worst mistake we could make would be to misunderstand its language.  As a categorically subdued album it needs permission to grow its treefingers; and as an atmospheric and moody walk through a damp undergound The King Of Limbs is quite beautiful.