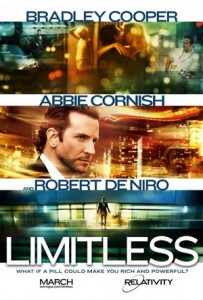 Limitless is a stimulating hypothetical situation that fails in style and in narrative.

Limitless is good entertainment for sure. A nice diversion from the day, it’s highly stylized content is perfect for taking the mind away from reality. Many good blockbuster type flicks do just this and do it quite well. But those movies stay within an unspoken construct that Limitless breaches. In storytelling, when someone breaks the laws of nature for selfish reasons, karma is right around the corner. Yet in director Neil Burger’s thriller, anti-hero Eddie Mora never pays for his sins against the natural order of things.

It’s possible this complaint only registers if one views Eddie as an anti-hero, but it seems quite clear that he is not a very honorable guy. His superhuman endeavors spurred by the drug NZT are entirely selfish and driven by materialism. Conscientious films correct this imbalance in the final act, while Limitless ignores it entirely. There are no consequences for Eddie’s actions, he appears to win another day and there are no signs that he will ever be brought back down to earth. The conclusion ought to have featured a drug-free hero who discovers his “limited” potential and its intrinsic value. Preaching isn’t a necessary component in film, but an element of realism is, and in this case that reality ought to have delivered a rather poignant lesson.

The other major issue at play is Burger doing his best David Fincher impersonation. There are so many slick cut scenes and segues in the movie that it’s a sensory overload. What Fincher did with purpose, with intention, and with commodity in Fight Club, Burger does sloppily and extraneously. Instead of enhancing the story and subject matter the stylistic edits distract from the story. Somehow by adding more and more toppings to the ice cream sundae, it became increasingly vanilla.

All said, it’s still an entertaining film to go see when you need to take your mind off things for awhile. It’s just that much like the drug that makes you a perfect version of yourself, Limitless has comedown symptoms that destroy everything it built.