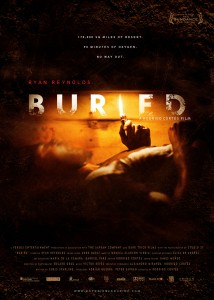 Minimalist cinema with minimal flaws, Buried is an uncommon entry into the thriller genre.

Buried is a captivating film and will be one that lingers in the mind well after it’s over but it’s not an amazing film per se. The bookends comprised of the opening and closing credits are extremely awkward for the tone of the film. The beginning title sequence is too energized for a film that will spend its entirety in a wooden coffin and the closing credits roll with a happy-go-lucky backwoods tune that doesn’t fit the conclusion of the movie at all. This film demands minimalism on either side of its taut 90 minutes. Unfortunately, its demands were not met.

It should be noted that Ryan Reynolds is great in his role. It’s amazing that a movie can be so gripping in such a confined space. Save for the scene involving a snake and a fire — a very contrived incitement of action and likely a ploy to extend an already short reel — there is no fat to be trimmed.

Buried is anything but boring and interpolates interesting commentaries on the war in Iraq, government contracts, the companies that fulfill them, and hostage negotiations. A far cry from a “Hollywood” film it has a very hopeless and defeated feel about it. Whether this story is an accurate portrayal of something that actually happens in the middle east is unclear, but as a plausibility it is quite a scary situation and director Rodrigo Cortés captures that hysteria.

Something about the repressed mood of Buried makes it feel like it ought to have a suprise twist in the end and reveal itself in the conspiracy thriller genre — perhaps with an uncovering that reveals the U.S. government was behind the whole thing. Had the film ended any other way it probably would have needed to go in such a direction to maintain its creativity but it doesn’t, and instead works as a sad, dark piece that is as contained and restrained as the coffin from which this story rests.