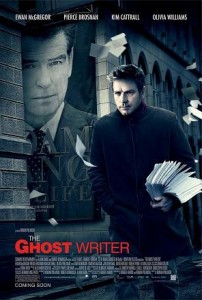 At its best it’s an entertaining diversion, but at its worst The Ghost Writer is clichéd and unsure of itself.

In spite of his less than attractive public résumé, Roman Polanski has a very reputable filmography. The Ghost Writer, however, is not among his finest work. Polanski isn’t entirely to blame for this movie’s shortcomings as the predictable and clichéd screenplay is its primary faultline.

By revealing its plot details in rather obvious ways, The Ghost Writer approaches its audience with a barely juvenile respect. The moments of foreshadowing are plain and bare and on many occasions the dialogue is so loaded you almost expect the actor to finish the line winking at the camera and saying “hint. hint.” Continuing in condescending fashion writer Robert Harris makes use of a number of half-baked plot clichés with perhaps the most ridiculous being the small story wrinkle of a character who was getting to close to the truth consequently “falling down the stairs” resulting in a coma.

In addition to its hackneyed script The Ghost Writer suffers from a cluttered tone. At times its an espionage thriller, at others a political drama, even a scary mystery, all the while attempting to be a film about an unsuspecting writer who finds himself in the role of investigative reporter. The incongruous score contributes to the aimless direction. Some of the segues sound more like a scary children’s movie featuring Tim Burton landscapes and an inn with a sign that creaks in the wind (note: this actually happens.)

On a technical note the sound editing is awful. Even when the dialogue is intelligible there are an irritating number of “F-words” turned into British slang in order to achieve a PG-13 rating.

Ewan McGregor is respectable in his role as the ghostwriter and Pierce Brosnan is, well, Pierce Brosnan, but in the end The Ghost Writer is unsatisfying. It’s a very predictable film with pages and pages of whodunit clichés resulting in a film that fails to respect its audience’s intelligence.