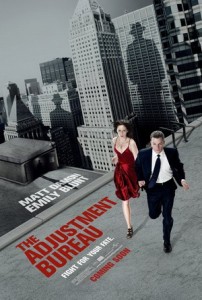 The Adjustment Bureau is an entertaining vehicle for telling a nice love story, but as a mind-bending thriller it is clunky and expository.

Twenty minutes into this film it becomes apparent that it’s going to work better as a love story than a mind-bending thriller. While advertisements and trailers depict The Adjustment Bureau as a quasi-action movie, the adorable romance between the two leads is the reason to see this film. Matt Damon and Emily Blunt’s on screen chemistry is natural and as a tale of love’s refusal to give up, this is a nice film. On the other hand, the thriller construct used to tell the story has many problems.

On a technical level, there are some loopholes in the plot that are understandably necessary if it is going to move forward. For instance, the caseworkers in charge of making “adjustments” cannot forsee the decisions of humans if those humans are surrounded by water. Something about the water blocks their mind-reading abilities. This detail is never explained but is central to the advancement of the plot. A rather convenient detail. Another example is that Matt Damon’s character, David Norris, is able to knockout one of these caseworkers with just one punch, enabling his escape, when earlier in the film a caseworker is hit by a car and gets right back up. Not to mention Norris previously punched a caseworker and it hardly phased him. Another convenient plot hole.

Even if these technicalities had been sufficiently ironed out there would still be the philosophical undertones that muddy the film. The premise that there is an omniscient chairman overseeing the course of human history is part of an implicit Judeo-Christian framework. The movie very nearly serves as a theological debate between predestination and free will. Granted it is this struggle that gives the love story its purpose, but the allegory of chairman and caseworkers as God and angels, respectively, is so heavy-handed it corners the audience into its philosophical interpretations.

In the film the details about the adjustment bureau are delivered through cold exposition and dialogue. The caseworkers exhibit little to no personality and neither is there any substantive essence attributed to the chairman upstairs. That is, until the final scene when an unheralded, although rather predictable, final decision by the chairman permits the lovers to be together via a re-write of the master plan. The problem with this development is that it doesn’t fit any of the previous behaviors or attitudes of the bureau and its members. A consistent portrayal of the chairman would’ve made the conclusion feel smoother. Further, the caseworkers could then be seen as making rather “human” mistakes as it pertains to their execution of the chairman’s plan. Their inability to see the big picture would encourage audience empathy and would have sparked sympathy for their narrow-mindedness, shortsightedness, and lack of improvisation. Not only would this create commentary on top of The Adjustment Bureau‘s implicit commentary, a bureau with warmth and compassion is a far more welcoming philosophy to base a movie on than the frigid and calculated theology of George Nolfi’s directorial debut.

This film will estrange a lot of viewers and rightfully so. Its narrow allegory attempts to reignite a debate that isn’t even a part of many Americans’ vocabulary. Which is why it’s a good thing the film works so well as a story of love against the odds. The two leads are extremely likable in their roles and the universality of the love story conquers the exclusivity of the plot’s presuppositions.