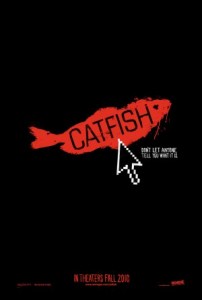 Catfish unveils the gritty backend of a socially networked society with this gripping tale of misappropriated desire.

This surprising documentary plays out more like a work of fiction than one of fact, and perhaps it is. With the recent uptick in prank-umentaries it’s entirely possible that Catfish is fictional, a scripted movie with a loaded plot, a sort of manipulation of the audience’s sensibilities. But the filmmakers claim it’s real and that’s good enough for me. Because unlike Exit Through The Gift Shop where the quality of the film is entirely dependent on its tomfoolery, Catfish works regardless of whether it’s true or not.

Beyond being a very entertaining drama about an online relationship, this movie also serves as an interesting footnote to 2010’s juggernaut The Social Network. Catfish unveils the gritty backend of a socially networked society. Derangement can be unleashed in hurtful ways in a network where truth is only profile pic value, and unsuspecting parties can be readily exploited in this virtual world.

Directors Ariel Schulman and Henry Joost dive into an online courtship that is funny and then weird and eventually extremely uncomfortable. Catfish appeals to the voyeurism of our times and is unbelievably gripping.

The filmmakers expose the pitfalls of the internet culture in which we live. A movie like this will likely make many of the less web-savvy even more insecure about their own privacy and security online, but that realism is exactly what plugs this film in to the younger generations’ psyche. Catfish accurately depicts what can happen when a person decides to use Facebook and Google in a drastically unhealthy way.

Rather than making the documentary in to a great reveal of the dangers of social media, it’s a sad story about a desperate woman with unfulfilled dreams. In need of an escape, something other, she creates a web spun of lies and desires. Whether it’s real or not doesn’t matter, Catfish plays out fantastically. While the possibility of it being a prank-umentary does lend its title to a rather clever double entrendre, it’s not important whether we are the cod and the filmmakers are the catfish keeping us on our toes with a fake film. Questions of authenticity are auxiliary. Catfish is a moving story and a thrilling documentary that poignantly blends reality TV and pertinent subject matter.