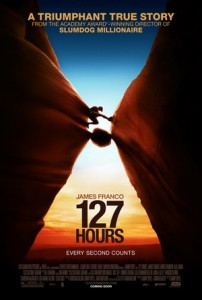 Rich with hope and bearing a lesson that the relationships in our lives can keep us holding on in the hardest of times, 127 Hours celebrates that love saves.

At its core 127 Hours is a film about the power of the human spirit. It unfolds much like a vision quest for Aron Ralston as his unimaginable circumstance sends him on an internal journey of meaning and growth. The themes are manifold and budding with import for anyone listening but never does it feel like there’s a message being preached. It’s possibly the most positive and uplifting movie of the year.

As for cinematography it’s a very stylized film. The anticipation of Ralston’s inevitable fall into the crevice of the rock is nail-biting. Everyone knows what’s going to happen from the minute the movie begins but somehow director Danny Boyle is able to keep it fresh and alive. 127 Hours is edited in such a way that it maintains interest through what could have been a rather dull middle section. By the use of hallucinations and flashbacks as storytelling devices, Boyle introduces his audience to the heart of the man.

The musical direction was one of the biggest highlights of this film. From Academy Award winner A. R. Rahman’s spastic noodlings to a Chopin nocturne to Sigur Rós’ impeccably positioned “Festival”, 127 Hours is full of felicitous selections.

In the end this movie is bursting with elation that has even more impact because the story is true. Survival is an instinct written in the DNA of every woman and man. What Ralston did might seem impossibly difficult but what makes this film special is that it reminds us that we are stronger and more resilient than we think. Rich with hope and bearing a lesson that the relationships in our lives can keep us holding on in the hardest of times, 127 Hours celebrates that love saves.