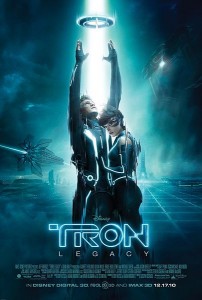 As a huge fan of the original TRON movie I had certain hopes going into this one. I won’t call them expectations because I was prepared to be less enchanted with the slick 2010 CGI than I was with the blocky yet congruous graphics of 1982. My interest in TRON: Legacy was primarily for its mythology and fun popcorn-flick value. But after a gaping story point was brushed over I could no longer enjoy the film and was simply waiting for the credits to roll.

This plot entry I speak of is the extermination of an enigmatic hybrid race of which Olivia Wilde’s character, Quorra, is the sole survivor. This could have and ought to have been the whole film. Lose the non-compelling apocalyptic threat of Clu and the programs escaping into the real world and wreaking havoc — how exactly would that happen anyway? — and focus in on a story compelling to humanity: genocide. Instead the writers and director chose to gloss over most of this storyline using a simple voiceover flashback. Viewers are left with insufficient detail and are destined to feel that they just missed something, whether they can put their finger on it or not.

This middle section is when the film really begins to slow. The character development is so shallow that it’s hard to get invested in them. Add that to a villain’s endgame that is never fully rationalized nor spoken of in more than generalizations and we have a film that serves no master except the spirit of action and its throne of CGI.

If I could have read a thorough synopsis of the film and received my fill of TRON mythology that way, I probably would have opted to. The visuals were stunning but all I really cared about in the end was filling in the blanks of the larger story. Maybe this is because the powers that be are clearly setting up a franchise here. Spolier alert: the character of Tron who has been assimilated for evil purposes has a change of heart and aids in saving the day. This sets up the third film to feature Tron’s return, fighting for the blue team. And if you missed Cillian Murphy’s awkward cameo appearance in the board room scene early on, not to fear. It’s almost a certainty he will play the prominent enemy to the young Flynn in a future installment of the franchise. Why else would they cast him for such a bit role? And don’t tell me it’s because he’s a fanboy of TRON.

What could have been, ends up swallowing whole what actually is. A story that connects with our humanness is what makes holiday blockbusters, or film in general, worth the time and money. Unfortunately, TRON: Legacy is as spiritless as the programs that populate its world.