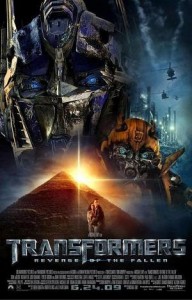 It’s not often I dislike a movie as much as I did Transformers 2 so I’m gonna get my punches in while I can. It’s important to note that I thought the first of the Transformers franchise was a decent movie, but this second installment is so dorky. It has its moments of cheesy humor that work and Shia LaBeouf fits his role well but the only interesting parts of the film are when Sam Witwicky (LaBeouf) is in college pretending to be a normal kid with a talking yellow sports car.

Director Michael Bay wastes no time bothering with the performances of his actors. Most dramatic scenes feel like they were filmed on just one take. Perhaps this is why the action scenes eventually bore. There is no connection with any semblance of story and it’s not until the ninety-minute mark when a history lesson is given and some of the plot details start to make sense. Prior, we can only wonder what is the point of this poorly organized plot full of all the usual formulaic ingredients. While the CGI is cool, it still feels like watching a cartoon. There is little realism to the special effects. The final action sequence is outright chaotic and overlong. It’s too bad the Academy doesn’t have a category for explosions, ’cause Michael Bay would blow away the competition. (See what I did there?)

Ultimately, there isn’t much redeeming in this one. It’s pretty awful. I’m not sure what kool-aid was on set but I want some of what they were having. With so many things to rag on — um, anyone else take issue with the jive-talking robots? — let’s wrap it up with something positive: Megan Fox is hot.