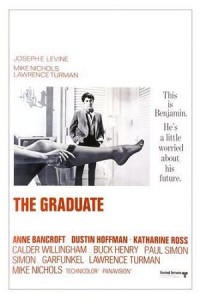 Dustin Hoffman is equally as effective in his portrayal of the adrift young man, Benjamin Braddock. The downside in his performance for me is that, having seen Rain Man before seeing this film, most of his neurotic moments in The Graduate come across as slight gestations of forthcoming autistic character Raymond Babbitt.

The awkwardness of Benjamin’s affair with Mrs. Robinson, played perfectly by Anne Bancroft — whom it should be noted is only six years Hoffman’s senior in real life, not the two decades or so the film positions her to be — is humorous and dramatic at the same time. There is an appropriate balance of tension and comedy that really gets this film off the ground.

However, as the affair ends and the film turns to Benjamin’s pursuit of Mrs. Robinson’s daughter Elaine, the story loses a bit of energy. The dark scope of infidelity and Benjamin’s cougar-love is replaced with a half-baked and commonplace love chase. The story’s ardor does return in slight towards the end but gets a bit ahead of itself in an overdramatic church scene at the culmination of the film. And the final scene on the bus as Benjamin and Elaine ride away is perhaps the greatest among many great scenes in The Graduate. Benjamin quickly realizes that he still has no plan, and Elaine’s smiles fades as she looks upon his face and sees that his own smile has been replaced with something more ominous.

The soundtrack is perhaps the best thing going for The Graduate and that’s saying something. If you don’t know, now you know. And in spite of it being filmed in the 1960s with what would now be considered primitive technology, Nichols and cinematographer Robert Surtees (Ben-Hur, The Bad And The Beautiful) wonderfully utilize zoom lenses, focus effects, and creative frames to make this film feel cinematically relevant still today. I would imagine for the 60s some of these shots were pretty ground-breaking.

Overall, The Gradaute is a very good story albeit one that has more weight during its dark passages as Nichols conveys the disappointment of a quarter life crisis much better than he gives import to the persistent pursuit of young love.