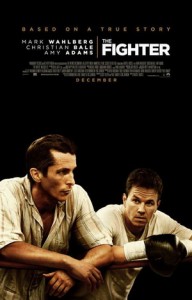 Last night I had the opportunity to see a SAG screening of The Fighter which was followed by a Q&A with the cast and director. Before I share my experience of the latter I want to say a few things about this film.

The Fighter is filled with stellar performances, most notably Christian Bale as Dicky Eklund. From the opening scene to the final one, which consequently are both couch interviews involving Dicky and serve as bookends to the film, Bale is convincing and committed. His portrayal of a washed-up boxer addicted to crack ought to nab him an oscar for best supporting actor. Mark Wahlberg and Amy Adams as Micky Ward and Charlene, respectively, are likewise outstanding in their roles. Rounding out the a-team of this ensemble cast are Melissa Leo, who portrays Micky and Dicky’s mother, and the Greek chorus of their seven sisters. From start to finish this film rests on the laurels of its actors and the characters they fulfill.

The direction is very good as well but it was a friend of mine who pointed out really how impressive the cinematography was. Many of the shots are simply natural to the emotion of the scene and can go unnappreciated. Surprisingly it’s the boxing matches that really showcase the cinematography — they look like actual HBO footage. Further, the sound editing of the fights is incredible. Both the way they splice in sound bytes from the actual matches and the sound effects of the brutality deserve recognition. It was the fights that made this film great in my eyes. They enhanced the visceral experience of Ward’s disfunctional family by giving both the audience and Ward a sense that in the midst of such turmoil there was something winnable. His eventual victory is sweeter having trudged through the familial drama.

But now a quick note on the screening, particularly the Q&A session that followed. I don’t recommend seeing a film in this environment unless for some crazy reason you find a mob mentality endearing. If I didn’t know any better I would suppose all of the actors in attendance were auditioning for the role of “audience” by virtue of their overly effusive reactions to every little bit of the film. I didn’t realize there were so many laugh out loud moments in The Fighter but apparently I was mistaken. It’s inevitable that there are bound to be people in attendance who are more in it for the celebrity of the cast than for the art of the film. But I was surprised to see that many of the audience members were so laughably starstruck; even to the point of restrained hysteria. If that’s possible. Very weird.

Nothing of interest, relevant to a film review, was shared during the discussion following the film. The Q&A almost exclusively consisted of interesting stories about the filming process or lighter moments on set (most of the funny stories were told by Wahlberg). It wasn’t awful to sit through, although it did last a little long for my liking — I was there to see a film, not ogle Hollywood stars. I also don’t want actors, or even directors for that matter, adding their personal meaning to a film. It’s art and should be free to be experienced individually without people who are so close to the film supplementing interpretations. Next week I will be repeating this process for a screening of The King’s Speech, which I expect will draw a much more subdued audience.

The Fighter is a great film, deserving of the many nominations I’m sure it will draw. I could probably say so much more about it here, but would rather do so with you face to face. But first, if you haven’t, go see this one.