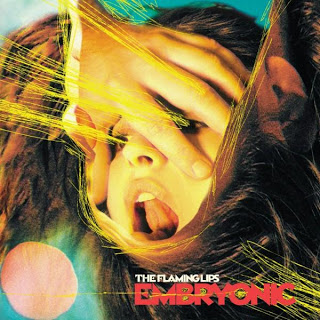 After twenty-six years as a group, Wayne Coyne and friends are still making relevant music — as relevant as experimental spacey rock can be. With their twelfth studio LP, neo-psychedelia band The Flaming Lips have again received widespread attention for their work. Embryonic is the first double album the band has attempted and can be both inventive and indulgent, as Coyne openly admits that the two-disc format gave them the freedom to “sprawl a bit.” So sprawl they did. At eighteen tracks and seventy minutes, Embryonic is obscure and messy, yet sustains a clear concept overall.

In an interview with Billboard, Coyne stated that part of the reason he likes some of his favorite albums (exs. The Beatles’ White Album, Led Zeppelin’s Physical Graffiti) is that “they’re not focused. They’re kind of like a free-for-all and go everywhere.” Using this as motivation for their double-LP, The Flaming Lips reveal their self-indulgence. This isn’t abstract art, and as such, Embryonic needs a level of focus. There is a definite theme found in the music, however the problem is that with so many tracks, some of them needless “freak-out vibe” jams (“Aquarius Sabotage”, “Your Bats”), the album wanders a bit off track and the concept is lost on all but those who try hard to find it.

As it’s title would suggest, Embryonic is about the unborn…