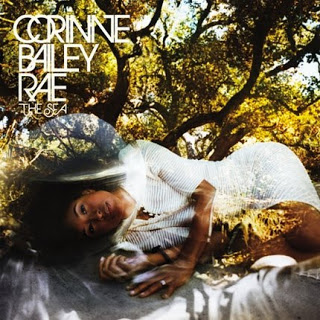 It was the premature death of her husband, Jason Rae, that kept Corinne Bailey Rae away from the music scene for the four-year hiatus between her eponymous debut album and 2010 release The Sea. One can expect to hear the effects of her loss and grief in the new album and to Bailey Rae’s benefit it is to this approach that critics have turned in consideration of her new music.

Rightly, it would be inconsiderate and insensitive not to consider the pain that Bailey Rae has gone through and how it has affected her new songs, but in review, while striving to maintain consistency and fairness, we must also look at the music simply as it stands. Alone. Out at sea. And without a preconceived sensitivity spawned by our connectedness as human beings. Essentially, the question to ask is whether someone with no knowledge of Bailey Rae’s misfortune would feel the passion of her experience in the music.

It is immediately apparent that The Sea lacks the catchy radio hits that brought Bailey Rae acclaim as the breakthrough act of 2006. The polished production and archetypal neo-soul drum beats have been replaced with a deeper infusion of jazz and blues. The hooks are mostly forgettable and Bailey Rae herself sounds less accessible, almost as if the music serves as a bubble protecting her from the outside. This barrier depreciates the honest value of her voice and shows that she is not yet ready to let her hair down as a lighter Bailey Rae proclaimed in the 2006 hit “Put Your Records On”. But a veil such as this is to be expected, as the album largely is a vehicle to effuse her loss. The problem with this is that in her disclosure there is hardly a memorable moment.

“Closer” provides the album with its one lift while the rest of the tracks tend to drift by as on the sea Bailey Rae seems to be singing of. With a sexy R&B groove in which we find Bailey Rae giving her best Erykah Badu impression, “Closer” sits back in a funky 70s pocket and is poised to be the most widely successful track from the album.

The first two singles released, “I’d Do It All Again” and “Paris Nights/New York Mornings”, are both exemplar of what the rest of the album sounds like. Jazzy and tranquil, most of the work on The Sea takes on a singer/songwriter character that hearkens back to the inception of neo-soul when a guitar still had a place in the mix. Much of current neo-soul relies on synthesized beat heavy jams that are more akin to urban R&B than soul at all, so in this regard we must applaud Bailey Rae for remaining true to herself and her style.

At times Bailey Rae even dabbles with 60s guitar riffs a la The Beatles in songs like “The Blackest Lilly”, 70s folk in “I Would Like To Call It Beauty”, and The Doors-era psychedelic rock in “Paper Dolls”. In her experimentation however tends to be her shortcoming when tracks such as “Feels Like The First Time” seem to have something going when a delightfully dirty groove is lost in a haunting yet ultimately unremarkable chorus.

For all of the bright moments strewn throughout Bailey Rae can’t seem to piece together a full four or five minutes of notable music. Mostly we are left with a sense of what’s lacking, a sense of what could have been, a sentiment I’m sure Corinne herself has been struggling with these past four years since tragedy left her sadly alone amongst the waves.