for those of you who don’t know, Frou Frou is the project of Imogen Heap and producer/song-writer Guy Sigsworth. Sigsworth is a british electronica producer who has worked with artists such as Björk, Madonna, Britney Spears, and Alanis Morissette. the style he brings to the tracks he works on is typically of the trip-hop or downtempo vibe. i find that i am pulled in by his downtempo electronic style much as i am drawn in by acoustic folk artists’ stripped back approach. there is something organic and emotional about it. so, in tribute to Guy Sigsworth i have compiled a working production discography of songs he has either produced, co-produced, or contributed the programming for (which in the electronica genre is akin to producing). below is a screen shot of the discography.

i’ve also discovered a short clip of an unfinished song by Frou Frou that many fans agree shows great promise. unfortunately, Frou Frou was a bit of a one-off and we probably won’t ever see the finalized version of the track. i’ve taken the liberty of creating an extended version of the song and have included it here on my blog for your enjoyment. if you like the Frou Frou/Imogen Heap vibe you’ll love this one:

and here is the screen shot of the Guy Sigsworth Production Discography in 2 parts: 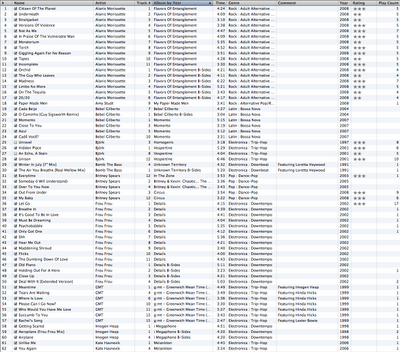