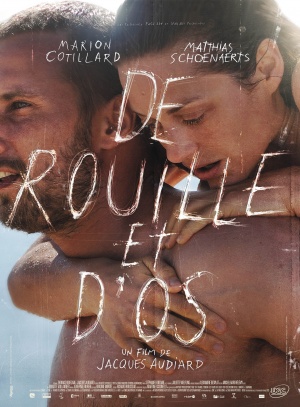 Rust And Bone is an unconventional love story. And one that I wish I liked more than I did. It’s very well acted, boasts a finely selected soundtrack, and holds a fondness for me when I think back about it. Yet I wasn’t able to get inside the process of the characters emotional arcs as well as I would have liked. I think this is its major, if only, flaw. It’s hard to distinguish the leads’ motivations or what they want out of the relationships around them. I didn’t find myself investing in the film any less as a result — the acting and portrayal of emotions, even if ambiguous are too on point for this to be the case — but it did leave me in the dark as to where the story was going and why it mattered. It’s beautifully shot, some of my favorite cinematography of 2012, the images still dancing through my mind, but the script doesn’t get enough out of the leads in terms of their desires and purposes and as a result the third act makes less of an impression than it should.

Warning: Invalid argument supplied for foreach() in /home/jonatha0/public_html/wp-content/plugins/netflix-rss-feeder/netflix.php on line 450