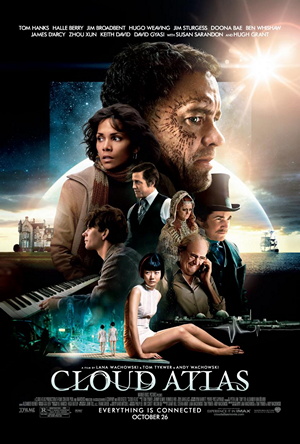 With lofty aspirations and good intentions the Wachowski siblings present this grandiose tale spanning eras and earths. A sprawling screenplay such as this is difficult to reign in, the vast sea of this story is disconnected, and sadly the whole is less than the sum of its parts.

There is a lot to be applauded in Cloud Atlas. Especially if the film had more focus. Yet it’s too over-saturated to make a significant impression. The things that don’t work outnumber the things that do. Tackling too many themes at once, from racism to cloning to spirituality to big business and the energy debate to sexism and homosexuality, it’s more than anyone can chew in one sitting (even a nearly 3-hour sitting.)

Many of the sweeping montages in which these themes are brought to the foreground are quite beautiful and meaningful. Cloud Atlas ends well with a welcome motif tie-together, it’s just a shame it wasn’t thematically consistent throughout. It’s difficult to determine what this movie is about or even what it might be trying to say.

A few of the specific shortcomings should be noted. The story of the old Cavendish man is a nuisance. It’s neither funny nor complementary to the film as a whole and ends up feeling superfluous and mis-toned, with comedy bits that undermine the gravity of what aims to be an infinite saga. Tom Hanks is not a good choice for the lead(s). They are roles spanning several characters in distinct epochs and require remarkable versatility, which is not his particular gift. The dialect in the 2136AD story is ridiculous. It sounds like they live on a caveman plantation, like they are impersonating neanderthal slaves. But the worst part of this language choice is that its impossible to follow and this movie needs all the help it can get in that area. The leprechaun/green-devil idea comes off as cheesy. There must be a better way to display Zachary’s internal psycho-struggle. And the mystery-novel obsessed Javier, the neighbor to Halle Berry’s journalist character, is a dorky choice and yet another genre morass.