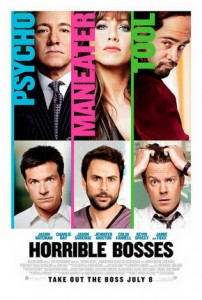 Horrible Bosses is hilarious, a credit to the pitch perfect cast who are able to maximize this irreverent and immodest office comedy.

A movie like this, with an inane plot and bawdy humor, relies entirely on the strength of its cast, and in Horrible Bosses the stars are bright. Jason Bateman, Charlie Day, and Jason Sudeikis each have impeccable comedic timing groomed in the years spent in their respective comedy roles (Arrested Development, It’s Always Sunny In Philadelphia, and SNL…for those not familiar.) Add to that power trio an ensemble consisting of Jennifer Aniston, Colin Farrell (think Tom Cruise in Tropic Thunder), Kevin Spacey, and Jamie Foxx — who each play strange aberrations of their typical roles so convincingly that it feels like we’ve watched them do it for years — and you have all the right pieces for a six-pack building laugh fest.

That the story has no real depth is of benefit to the actors, who in turn have the freedom to roam and discover nuances in the script that guaranteed weren’t there to begin with. Many of the scenes appear improvised in such a way that one could imagine multiple variations of the same dialogue playing out in equally funny renditions. So in this sense it’s hard to measure what it is that works in Horrible Bosses. It’s definitely not the outrageous storyline or even the ridiculous scenarios littered throughout. But once you see the performance and chemistry of its cast you start to get a sense for what is so positively perfect about this posse comedy.

Horrible Bosses is raunchy, make no mistake, but largely steers clear of the grim prospects black comedy regularly entertains. It remains lively enough to keep its base premise from weighing it down and the laughs are consistent. Even though it has its lewd moments it doesn’t rely on gross-out humor but firmly handcuffs itself to the banter and one-liners of Bateman and Co., capable hands to be sure.

Credit is due to director Seth Gordon — who brilliantly helmed The King Of Kong: A Fistful Of Quarters and leads with efficiency here, mostly by getting out of the way — and John Francis Daley for some riotous writing. As Bridesmaids exits theaters Horrible Bosses enters them as this summer’s most suitable successor.