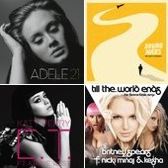 Each month I make a playlist of some of the best tracks from the radio. The list is compiled based on airwave dominance and personal preference. Here are some of my favorites from airplay in April 2011. Below is a link for the complete 35-song playlist in iTunes.

Britney Spears – “Till The World Ends”

Pitbull – “Give Me Everything”

What was your favorite song in April? Comment below.

The complete list in the iTunes store:  April 2011 Airplay