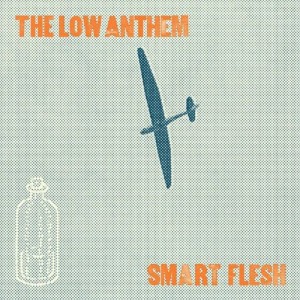 Smart Flesh is a sad hymn transmitted through an old transistor radio from another place, where apparitions wander bleak floorboards in search of peace.

A sing-song tune, it’s one of the lightest melodic moments on Smart Flesh. In contrast, it tells the story of a serendipitous meeting at a pharmacy between two destined lovers. The tale is palpable and frank, a beautifully simple love story.

The lead single from the album is this cover song of George Carter’s “Ghost Woman Blues.” It’s been slowed down to a crawl and the blues chord cycle is hardly recognizable underneath the oboe wanderings. Ben Knox Miller’s voice scratches through the track and sets the tone for the theme of weariness marked throughout the album.

Beautiful harmonies highlight this song. Dissonance resounds in the lines “never saw a rainbow sign / no meaning was I offered”, sung with a surrender that is absolutely enchanting.

Smart Flesh was recorded in a vacant factory building and the album inevitably embodies characteristics of its surroundings. Pasta sauce was the good this particular factory produced, but it’s not the product specifically that makes its way onto the album, but rather the blue-collar sensibility of a time passed. The Low Anthem refuse to acknowledge modernity as evidenced by their desire to record in a natural acoustic environment and utilization of metals and woods as percussion on the LP.

Poetically, this is a collection of songs reflective of humankind’s transience. Full of tales of love and loss, redemption and suffering, it’s an elegy; a hypnotizing and melancholy requiem. It’s a bit monotonous by the end, but its commitment to quietude is its command. There is a consistency and cohesion that demands closer examination. Smart Flesh might not be as emotionally effective as 2008’s Oh My God, Charlie Darwin, and definitely doesn’t contain a stand-out track quite like the title one, yet they are kindred albums. And Smart Flesh, while less direct than its predecessor, has an echoing and funereal temperament all its own.