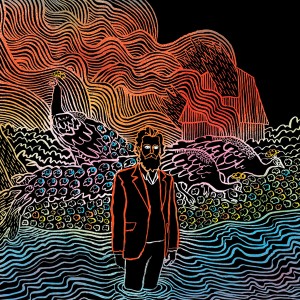 Kiss Each Other Clean

Iron & Wine walks far from home here, experimenting with horns and funk along the way. Beam’s lyrics are as loaded as ever but are fighting for space in the clutter of his newly acquired studio toys. While it’s a far cry from his earlier folk gems it’s not a bad creative step for him to take at this point in his career.

“Your Fake Name Is Good Enough For Me”

This is the song that epitomizes Sam Beam’s experimentation away from low-fi folk. Syncopated bass lines, half-time snags, and funky guitar riffing make this jam band track one of the furthest departures from the times of Our Endless Numbered Days. The song builds behind the strength of a horn armada and creates a mood for Beam’s lyrical rant to rise.

Another tune that focuses on the production enhancements of this Iron & Wine release. Like much of the album this song bounces along with off-beat mechanics. The groove is interrupted by a slide-whistling recorder making it one of the more unique tracks on the album. Yet, this one finds its strength in Beam’s words, in a call and response format in homage to blues and gospel.

Immediately this track makes one think of Dave Matthews Band due to its funky groove and heavy reliance on saxophone. It’s a jaunty little tune with lots of studio layers that would be sorely out of place in anything pre-Kiss Each Other Clean. It works here however.

Like a fever vision, Beam recounts the things he saw walking far from home. It’s very nearly a stream of consciousness and due to its repetition is rather hypnotic. In the final stanza distorted bass floats underneath and lifts the wandering storyteller from his terrestrial path and into the heavens. It’s another song that relies heavily on layers and instrumentation marking Iron & Wine’s significant shift away from folk music’s simplicity.

While there’s nothing particularly wrong with Iron & Wine’s move into a more polished approach to the folk genre, some things are lost in translation. The raw and visceral qualities of Sam Beam’s lyrics get washed away here in a sea of sweeping instruments and studio devices. The nuggets are still there, they’re just harder to find when sifting through the noise.

But while Kiss Each Other Clean will never be what Our Endless Numbered Days or The Shepherd’s Dog were to the indie folk world, it likely will be a valuable creative step for Iron & Wine. It’s still a good album and contains a good number of surprises that can be found as the layers are unpacked. It’s just not what fans have grown to love about Sam Beam’s music.