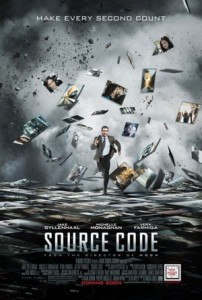 The success of Source Code rests not on its logic. Nor is its prowess its ability to explain Fringe-esque scientific phenomena in such a way that earns the credibility of its audience. The power of this film is in its fun.

At a quick 93 minutes, Source Code‘s strength is in its ability to get the viewer in and out without too much required. Sure it’s possible to painstakingly cover the details of the film’s plot which eventually lead to some gaping holes, but the point of the movie isn’t if it’s plausible. What is being sold here is energy with layers of mystery and romance.

Both leads are suitable in their roles, with Jake Gyllenhaal in pole position as an Army captain with a soft side, and Michelle Monaghan delivers her spot as his love interest with ease. The chemistry is believable as is the virtual chemistry of Captain Stevens with Source Code program officer Captain Colleen Goodwin, played by Vera Farmiga. The acting never gets in the way of the vehicle here as Source Code moves along speedily serving morsels of plot background at appropriate junctures. Director Duncan Jones, who also directed Moon, never gets ahead of himself and executes a succinct and entertaining diversion.

The major complaint circulating about this film is that in the last scene a development is introduced that ruins any logical progression of the film thus far. It’s true that given enough thought the plausibility of Source Code begins to fail, but this film arguably is not about being plausible. In fact, it seems that an element of wonder and or “magic” is an intentional aspect of the movie. While a case could be made that seeks to explain the alleged inconsistencies, it’s most often true that the simplest answer is the best one and, here at least, the simplest answer doesn’t work.

Yet the film itself is a simple answer to fun film a couple months before blockbuster season. As a short and sweet thrill ride it’s easily an adventure worth recommending. But perhaps its greatest accomplishment is that in the midst of inherent complexity Source Code maintains brevity, not falling victim to the over-elaborate tendencies of its genre.