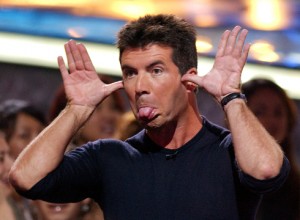 With Simon Cowell’s departure from American Idol the judging has become a little, shall we say, warm and fuzzy. I do not consider myself one prone to teddy bear sentimentalities. I also do not think I have the same discernment for talent as Simon. A voice of reason — or at least a voice of Simon — is a lacking commodity on this season’s American Idol. The Ghost Of Simon is what Mr. Cowell might have said if he were still a judge on American Idol. It works best if you read it with a British accent.

“Look. We’re kind of unanimous on this, it was good but it wasn’t great. That song was originally sung by a woman, and you sang it more like a little girl in one of those pageants on TV. It’s supposed to be a bit provocative, but that was rather juvenile.”

Casey Abrams – “With A Little Help From My Friends” – B+

“Well I’m not quite jumping out of my seat, but it was good. I thought you started to growl at the end there. I would’ve liked more melody. But I will say this about you: You’re a unique guy, a tad strange, but you definitely made an impression tonight.”

Ashthon Jones – “When You Tell Me That You Love Me” – C

“Ashthon, unfortunately, I’m not going to be quite as nice. Put it this way: If we were searching for the best hotel singer in America that would have been quite good. The simple truth is your voice is not good enough for that song. And quite frankly, I don’t think you’re as good as you think you are and I think you’re in trouble tonight.”

“Quite honestly, it was like someone handed a microphone to the bellboy at a hotel and asked him to sing his favorite song. I mean, with what you’re wearing and the weird movements you’re making on stage, it’s like a drunk Queen’s Guard or something. I didn’t get it at all. Sorry.”

“Yeah. Well. That was the best of the night so far by a long shot. Fantastic control; it was the right song choice for you. And Randy is right. If you’re going to sing a song like that you had better nail it, and you did.”

“James. It was good. I don’t think it was amazing. Last week’s performance was better but I think it was enough to get you through to next week.”

“Again I’m with Randy on this one. I couldn’t wait until it was over. The yodeling thing was almost too much. It was like you want one scoop of ice cream and you got eleven. I like you. I just didn’t like you tonight.”

“So. That part in there where you kept repeating the same high notes was dreadful. It was like the siren on an ambulance or something. The end was quite good though. I just could have done without all the rest.”

“Yeah. The beginning was great. However, it completely derailed in the second half. I mean, Thia, that transition was terrible. You’re young and you’re a sweet girl, but right now, it doesn’t seem like you have what it takes in this competition. You don’t seem to believe in yourself.”

“Let’s be honest. That arrangement was horrendous. I mean, truly. But as a singer, you’re brilliant. And I think you have that star quality. Good job.”

“Karen. Sweetheart. I couldn’t wait for that to be over. It was just so…boring. I’m afraid you might be in trouble tonight. And that’s too bad because you really are a great singer.”

“Yeah, it was good. You know who you are as an artist and that’s important. I don’t have much else to add to what the others said. But, well done.”

“I think that you actually played the clown tonight. I thought the performance was ungainly. And the song was a bit gimmicky with all the dancing and stuff. I think you’re better off with a song that showcases the unique qualities of your voice. I like you, I do. But the reality is, as we sit here, there are people singing that song at karaoke bars better than you just did.”

Who was your favorite? Who should go home? Comment below.

DISCLAIMER: This site is in no way affiliated with Simon Cowell and this post is intended for entertainment use only. I do not propose that Simon said or would say the above statements and any similarity to things he actually has said is entirely intentional and is plagiarized for its humorous intent.