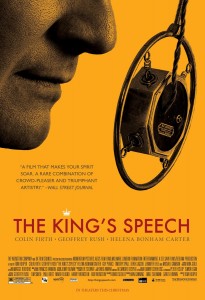 The King’s Speech has been nominated for twelve Academy Awards this season and is worthy of every one. In fact I’m going on record here saying Colin Firth deserves to win for Best Actor, no contest. The category of Best Picture is where is starts to get dicey for me. I can’t seem to develop any convincing argument why it shouldn’t win every award for which it’s nominated. The problem however is that I can’t come up with a convincing argument why it should.

I really enjoyed this film. It’s brilliant, delightful, remarkable, and any other hyperbole you might want to throw into the adjective casserole. I’d even say it’s compelling. I’ve heard reports of many people saying they’ve connected with Prince Albert’s struggle as it parallels some barrier in their lives. That’s the power of storytelling. That’s mainly why I love film. Personally, I just didn’t feel that way about this one. I loved his journey and his internal battles and the story it told — and the fact that it’s all true — but I didn’t find any attachment to his character.

I think ultimately what makes this movie great to me in spite of my complaints is that it’s so much more than just what is shown on screen. There’s a larger story at play. There’s a man who has greatness inside him but a severe impediment that restricts his ability to fulfill his passions. Its significance is only enhanced by a world at war and a nation in need of leadership. When I think about this movie and all that is surrounding the story of a man with a stammer, I like it even more.

Akin to Firth’s Oscar-worthy performance is Geoffrey Rush as Lionel Logue, the King’s speech therapist. Without his role and delivery Firth would not have the nomination he has. Their relationship is the best part of The King’s Speech and there are countless memorable exchanges between these two that range from funny to poignant and sometimes both at the same time.

While it can seem a bit slow in the middle as the momentum starts to sag, it’s probably more appropriate to deem this pace “deliberate” rather than lethargic. Overall, it’s an amazing film that deserves all the credit it will continue to receive. My only hope was that I had felt more from the story and that it had relied less on its restrained and cerebral style. As I’ve said before, great film doesn’t just tell me what to think about what I’m seeing, it tells me what to feel.