Couch Critic: The Kids Are All Right 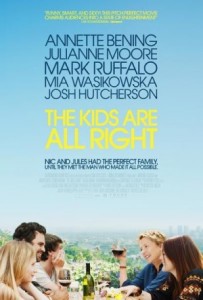 The characters in The Kids Are All Right are not simply means to an end, nor just ends in and of themselves. Director Cholodenko helms a film that brings vitality and humanity to the silver screen.

The Kids Are All Right is supremely funny and perfectly awkward. It captures a realism in life through a conversational script. Characters are consistently saying what you would expect them to if the dialogue was inserted into real life drama. Somehow the screenplay is able to be predictable in all the right ways but manages to avoid having that “scripted” sound.

Mark Ruffalo is pitch-perfect as the lone wolf type who leads a warm but self-serving life. As the father (read: “sperm donor”) to Laser (Josh Hutcherson) and Joni (Mia Wasikowska), Paul (Ruffalo) is extremely likable and embodies the fun-loving L.A. everyman who moves about free of outside responsibility. This naturally comes crashing down around him as circumstances begin to change. It analogously could have caused what is a very good movie to crash as well had the focus been about the character of Paul. But it never is about him. He’s auxiliary to the laudable performances of Annette Bening and Julianne Moore as lesbian wives.

Playing the role of Nic, the more type-A of the two mothers, Bening is superb. There are a number of intensely acted scenes that require complex subtle reactions to the situations around her and it is here where she shines. Her emotion to Jules’ (Moore) apology monologue is among the best in the film. Also notable for its judicious delivery is the part when she realizes she’s being cheated on. The scene is shot in such a way that the shock and isolation her character is feeling is communicated without any words at all. The sound editing of this sequence and the expressions on Nic’s face are rich with sensation.

In mentioning other performances it must be said that Mia Wasikowska, of In Treatment and Alice In Wonderland fame, is stellar as precocious and strong-willed daughter Joni. The end of the film when she is being dropped off at college is undoubtedly a scene that will grant Ms. Wasikowska quite a bit of job security. There is always room in Hollywood for gifted actors who avoid histrionics.

As to the film as a whole, one of its strongest qualities is that it’s very fair. There is never a sense that sides must be chosen among the onscreen battles. At any given moment both sides of a conflict maintain validity. This is the genuine nature of the film. Successful drama imitates true life, and in the real world no one side of an argument is ever completely wrong, nor completely right. These are people, with feelings, and this fluidity makes sympathy for all characters a possibility.

Sometimes life is a struggle. It’s also a process. By removing the pressure to choose a protagonist, director Lisa Cholodenko opens the film up to multiple possibilities, allowing it to breathe in people and relationships and not exhale neatly compartmentalized caricatures, but rather something human. In rendering the circumstances of the story secondary to the dynamics of family a great film has been made.