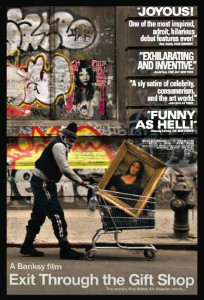 As a documentary it’s boring and indulgent, but as a prank it’s a creative commentary on the commercialization of street art… and a very “Banksy” thing to do.

This is a weird one. If it’s just a regular documentary about street art and about this guy Thierry Guetta, or Mr. Brainwash as he’s called, then it’s not very good. His art is terrible and it’s a story about how someone with no discernable talent can get famous and make loads of money. But if it’s a prank-umentary then it’s quite the feat of documentary art. Without this mystery of potential foul-play it’s a middling and trite film.

If Mr. Brainwash is an elaborate hoax put on by Banksy, the film’s director, this documentary is an incredible indictment of the commercialization of art. Let’s commit fully to the premise that Thierry was cultivated into the persona of Mr. Brainwash as a grandiose scheme by Banksy to make the art world look foolish.

Under this premise, it would appear Banksy was the one funding and creating the art which was then mass produced by a team of graphic designers and purported as the work of Mr. Brainwash. And by doing this he floods the street art market with generic meaningless pop art while at the same time standing behind Mr. Brainwash’s work via quoted endorsements on billboards around Los Angeles. Street artist Shepard Fairey likewise endorses Mr. Brainwash in anticipation of his upcoming exhibit. It seems highly unlikely that the two best street artists in the world would get behind Mr. Brainwash’s trivial work, especially after knowing how bizarre of a character he was anyway.

I suppose whether it’s a hoax or not, Exit Through The Gift Shop is an incrimination of the state of art and it’s commercialization. Even if Mr. Brainwash’s work is entirely of his own design Banksy could be showing us simply that people will buy any crap that’s out there. Simply create enough buzz and you can convince the masses that anything is art. However, it’s a more powerful statement if Banksy concocted the whole thing, especially since this would be a decidedly “Banksy” thing to do. As an artist who’s constantly biting his thumb at the status quo, a film with a thread of mystery is just his style. In lieu of beating a dead horse, here are two must-read articles about Exit Through The Gift Shop and its alleged hoax. In a sea of opinions about the film’s authenticity, Fast Company and Vanity Fair get it right.