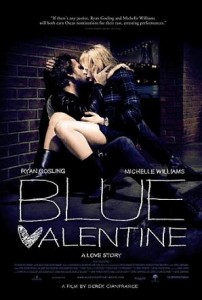 The saddest thing about Blue Valentine isn’t that these two can’t figure out how to make it work. It’s that the film never gives a reason why it shouldn’t. It’s more concerned with wallowing in the trauma than making a connection.

Wait. Why are they fighting? I suppose I could contrive some reasons. Ryan Gosling’s character, Dean, is upset that their daughter isn’t his offspring. Dean is an alcoholic. They’ve simply grown apart. Or maybe they’re just insufferable people who have no business trying to love another person. The folly with Blue Valentine is that it never answers the most important question: Why? Sure you can make intuitive guesses as to the source of the conflict, but there is no hard data that the couple are fighting about any of the above postulations.

There is a severe disconnect between the flashbacks of a happier time between the two lovers and the dreary present. It’s crucial to good storytelling that there’s some explanation of what went wrong — and if not, it at least should be made clear that this is a story about how in spite of no specific reason sometimes these things happen.

The two time periods shown in the film seem drastically far apart. There aren’t any scenes of the genesis of their relationship that point to the present turmoil, connecting the two disparate worlds. Dean and Cindy, veritably played by Michelle Williams, seem like different people in this “then” and “now” tale, and perhaps they are. In fact, the script only works if they are. But how, why, did they change so much? If storytelling has a universal component, and in its purest form it does, there should be some explanation of these star-crossed lovers demise on which an audience can hang their hat. If a story requires a vast amount of “reading into” or if crucial narrative pivots are left too open-ended, a story is destined to lose its voice. Blue Valentine shouts and yells until it’s blue in the face, but it doesn’t amount to much more than masochism.

Had the two lead characters been more likable or shown some redemptive qualities perhaps this story could have succeeded in the midst of its plot holes. There is a lot of sadness in this life, but there is also plenty of joy. If a film wants to set up camp deep in the heart of despair for the sake of telling a story that’s unflinchingly real and resigned, that’s fine. But it better make sense. We can forgive a lot of plot potholes if there’s a bit of redemption in a film, but if it wants to “keep it real” it had better be thorough.

In the end our questions — what are they fighting for? who’s side are we on? — are never answered. Even the last minute Hail Mary of Dean’s inferred alcoholism injected into the kitchen argument scene of the final act doesn’t fill the void left by the dueling time structure. The performances are amazing. Even Oscar worthy in Michelle William’s case. But a good film is more than just it’s performances. Instead of bearing an inclusive story Blue Valentine embodies bereavement, voyeurism, and sadism.