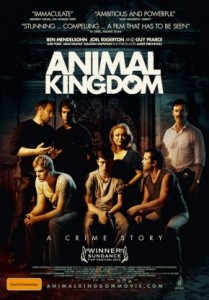 From the disquieting opening scenes through the tense final act Animal Kingdom knows exactly what it needs to do and executes with confidence.

As the film begins with a death scene that is antithetically detached it’s clear director David Michôd is on to something good. In a stoic mood that embodies the estrangement of lead character Joshua “J” Cody, Animal Kingdom upholds a bold atmospheric tone to conclusion. Michôd’s grasp on this deliberate climate is what makes his feature film debut so special.

With an audacious number of montages, the cinematography is perhaps the most important facet of these captivating 112 minutes. Usually, an overflow of moody scenes with no dialogue would over-sensationalize a story. Yet in this case, synthesized with a counterbalanced ambient score and shots that are edited with precision, these montages birth the film’s emotion and its voice.

At its core this is a mob family story. You will find yourself caring for the villains, a la the Godfather, and in the same breath yearning for justice. Animal Kingdom boasts an ensemble cast of almost exclusively Australian born actors. Without these inspired performances this film would never get off the ground; mired in its own melodrama, the poignancy of its affectation would be lost.

The script is alive and, in spite of only meager servings of lines given to some of the characters, each personality is readily knowable. It’s an accomplishment in quality over quantity in what is a rich character development film and a must see.