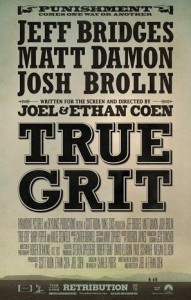 Every year that the Coen brothers come out with another “masterpiece” and I drag my legs to the theater hoping this time I will agree with the masses. And every year my hopes are in vain. I’ve never understood the attraction to their films. The only two I’ve enjoyed were adaptations, not original screenplays: O Brother Where Art Thou? and No Country For Old Men. By evidence, I had expectations of enjoying True Grit since it’s an adaptation of a famous novel. But once again, I must be missing something because I found it to be boring and hollow.

Jeff Bridges as Rooster Cogburn is the bright spot for me amidst a dreary landscape of desert-dry humor. The Coen brothers’ wit and tone is well suited to his delivery and he comes through with some of the best laugh out loud moments of the film. However, as soon as Cogburn and Mattie Ross, played wonderfully by Hailee Steinfeld who is so perfect in this style it seems she was born to play a Coen role, begin the chase after killer Tom Chaney the film slows to a halt. From this point until the final act the film is painfully drawn out. It takes way too long to introduce the antagonists and Josh Brolin has sadly limited screen time.

The plot of actually tracking down Cheney doesn’t develop fast enough. This would be fine if they were germinating the characters but instead it’s just actors telling stories and drawling in typical Coen styled dialogues.

By the final act I had completely lost interest. However, the shootout and rescue of Mattie Ross brought excitement and in the end it truly did feel like Cogburn cared for the girl as he carries her to safety and effectually saves her life. Yet it comes out of nowhere as there is little to no development of this relationship throughout the tedious middle section of the film. Cogburn displays no range of emotion that would make the ending seem like anything less than a stretch.

I’m not one for westerns nor the Coen brothers so I probably should stay away from films like this but I badly want to know what I’m missing. 95% on Rotten Tomatoes and thousands of adoring fans can’t be wrong, can they? If you have anything that might help me understand why True Grit or Burn After Reading or even classics like Fargo and The Big Lebowski don’t connect for me, please, I am all ears.