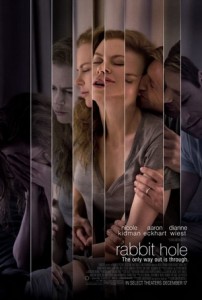 This is a very sober four stars for me. Rabbit Hole is not the kind of film you can get excited about. It doesn’t inspire. Nor is it all that much fun to talk about. But it’s real. And that’s what it has going for it. A sense of honesty and realism. If Rabbit hole is nothing else, it’s human.

At the risk of spoiling the movie, part of what makes Rabbit Hole work is that there’s no happy ending. Real life never has a quick fix, or at least not one that sticks. Screenplay writer David Lindsay-Abaire, who adapted his own play for the film, doesn’t offer any answers as to how to deal with grief. The film instead is about process and healing… and time. One step at a time. As Becca (Nicole Kidman) and Howie (Aaron Eckhart) work through their loss, there are good days and bad days. Yet the good days feel like their just about to break because everything is so emotionally fragile when two parents lose a child.

The duality of grief between the mother and the boy who accidentally killed her son, played brilliantly by Miles Teller — in my opinion, he steals the show here — is compelling. As we watch two different faces of sorrow unfold, deep layers of processing are displayed. The best scenes are between Kidman’s character and Teller’s as they share clandestine rendezvous on a park bench. Conversely, the worst scenes are of fights between Becca and Howie, where Eckhart is sorely out-acted.

The film begins with a oddly light mood. This is mostly because there isn’t any connection made with the grief Becca and Howie are experiencing. When the curtains open the son has already died and due to their being no early scenes of demonstrative grief or scenes depicting the son’s role in their lives it’s hard to empathize. Further exacerbating this distance are sections that flirt with comedy, at times so disjointed as to provoke chuckles over Becca’s awkwardness in adjusting to her circumstance. Eventually the plot details unfold in a bit of a surprise reveal and the pain appropriate to these characters begins to sink in for the viewer.

Culminating in a wave of emtion, Rabbit Hole appears to end rather ubruptly, only to properly finalize with a tag scene complete with a voice over that allows the film to breathe a little more than had it ended with Becca crying alone in the car. This is as happy an ending as real life offers, which is what gives Rabbit Hole it’s poignancy. Rather than cheapening the characters’ grief with Disney comfort, director John Cameron Mitchell tells a story about healing. It’s not easy or even comfortable to sit through, but the healing process rarely is.