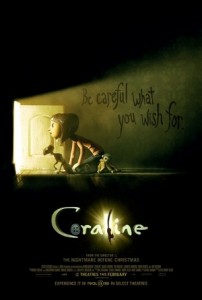 It’s amazing how far animation has come. Whether it’s the computer animated fare of Pixar or the stop-motion approach of Fantastic Mr. Fox or Coraline these films can incite emotion just as good as any regular drama… if the story is good enough. This is why Pixar is so successful. Not only are they producing entertaining films for the whole family, the stories are compelling. Sadly, Coraline is not. A mostly disposable affair, the only saving grace is that the visuals are interesting and the world they build is original.

For a “children’s” film it’s incredibly slow and confusing. It takes too long for the story to unfold and feels like you’re wandering down a dimly lit hall. There is a difference between mystery and muddiness, and unfortunately Coraline trudges through the latter.

The supporting characters are annoying and actually manage to alienate the heroine from the audience. It’s hard to see children enjoying this film as these auxiliary characters are mostly just weird and unsettling.

It’s not enough that an animated film be visually stunning or imaginative, it must bring its marionettes to life. Coraline pulls all the right strings in all the right places yet completely misses those that tug the heart.