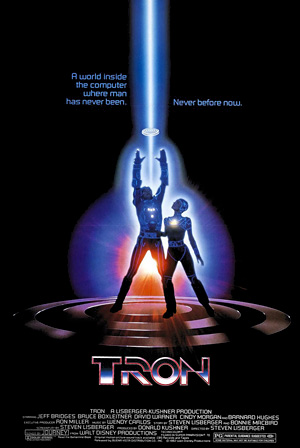 It’s no secret that TRON isn’t known for its dramatic prowess. Its claim to fame is its innovative CGI and concept. And while the computer animations at times are cheesy and really confess to their nearly three decade old timestamp, the old-school graphics add to the mystique of it being a different world. It’s linear, structured, and odd in a neon sort of way. From the looks of the trailer for 2010’s Tron: Legacy the updated CGI almost seem too real to make it actually feel like you’re inside a computer. Score one for 1982.

The story is by no means a complex one, carrying one simple plot string throughout. But the film engages the necessary fantasy story devices. The hero, in this case Kevin Flynn played by Jeff Bridges, has super powers and employs them in a sacrificial messiah-like role. Further, there is a strong motif of oppression by a dictator called the MCP (Master Control Program). The writers allude to slavery using religious metaphors and at times even invoke a theme of genocide. Viewers begin to care for the software programs within the computer construct as the film seeks to show that the programs share some sense of humanity with the users.

But the best part about the whole thing is that while it’s fun to read into, TRON doesn’t need all these deeper meanings. As a superficial electro-fantasy it is very enjoyable. I was smiling the whole time this thing was on screen… and it’s probably my fifth time seeing it.

The travel sequence on the Solar Sailer dragged a bit, and scenes towards the end of the film could have been cut in the interest of time, but overall this film is rather charming; partly because it’s so outdated. While fans of the film will find layers of reasons to claim its greatness, the groundbreaking visuals are the engine that stirs the drink.