Lively and danceable, Phoenix’s only misstep comes in valuing precision and method over heart and soul. 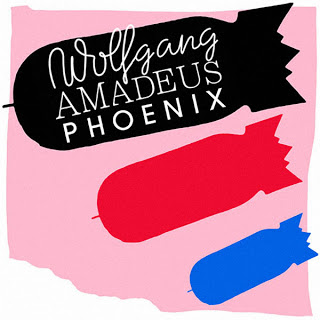 Oblique Strategies are a set of flash cards created by Brian Eno and Peter Schmidt used to help artists think laterally when facing creative block. Coldplay have been rumored to have used these cards in the recording of their 2008 album Viva La Vida Or Death And All His Friends which not coincidentally was produced by Brian Eno. Lead singer of french indie rock band Phoenix, Thomas Mars, admitted to using the cards “early and often” throughout the creative process of their 2009 critically acclaimed release Wolfgang Amadeus Phoenix; and it comes as no surprise after listening to the succinct 37-minute long album that a playful card game was used along the way as the disc maintains both a calculated feel and a sportive tone.

The most experimental track of the album, “Love Like A Sunset”, also happens to be arguably the best offering. Here the band is found bridging the gap between French club music and indie rock as part one of the song builds to an apex of processed sound where the beat colloquially “drops” at the halfway point. The groove is only matched in its ambition by the finale of the seven minute triumph in the arrival of acoustic guitar and a syrupy sweet vocal.

The widely popular “1901” is easily the most indelible song of the album. A repetitive chorus of “fold it, fold it” hangs over punchy synth syncopations and at no moment is there a waning of energy. “Lisztomania” is also noteworthy for its acute danceability. The fun of Wolfgang Amadeus Phoenix is in full effect in this opening track and it sets a very appropriate stage for what is to be found on the remainder of the LP: playful dance pop. Now, obviously we’re not talking about dance-pop in the fashion of Madonna or Lady GaGa. This is clearly a very indie style of dance music, but also distinctly frisky. Perhaps one of the best examples of this indie and dance dichotomy is “Fences” which bounces along in a silky groove, complete with handclaps, and yet has a purportedly “indie” chorus.

Phoenix craft an album that moves along just fine, even if it does fade a bit heading into the second half. Just the same, even in its best moments the meat of Wolfgang Amadeus Phoenix makes this a difficult album to love but an incredibly easy album to like. As the songs begin to bleed together it’s plain to see there are no major missteps here, but conjointly there are also no real risks. What this harbors is a safe album that can at times feel a bit sterile and unfeeling. This sort of cold purity is exactly what one would expect in an indie pop album constructed so meticulously. When Phoenix weren’t disassembling writer’s block by way of Oblique Strategies they were employing a “merciless doctrine of self-editing and concision.” Does this sound like a band that is breathing passion and impression into the notes they are recording? It resonates more of a group that is constructing an infectious dance album.

Reading between the lines of frontman Mars shouting that its “better than it looks” one sees that it truly isn’t. It’s perhaps worse than it looks. Which is not to say that it’s bad, in fact it’s quite good. That it looks so much better than most of the music in its elbow space is why we are able to criticize Wolfgang Amadeus Phoenix for it’s only prominent flaw. Yet this flaw remains: any warmth of feel these tunes might have had, appears to have been lost behind the polished production and consciously prosaic environment nurtured by those harmless flash cards. This is not to say that techniques used to breakthrough creative dilemmas are to blame for the lack of emotion on the album, but rather that the feeling that something’s missing is perhaps hinted at by a creative atmosphere that is less inspired and more calculated.