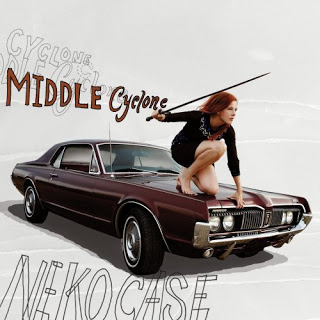 Partially committed to tape in a barn on a farm in Vermont, Neko Case’s Middle Cyclone has a noticeable field recording feel that reminisces of a moonlit night and a sea of crickets. In addition to the nearly 32-minute track of just that (crickets in a field) the ambience is felt even in the strumming of the acoustic and the abstinence of Case’s vocals. The power of her voice is at times calculatedly restrained, yet still manages to carry all the weight of a belted refrain. Her tone is stoic and sober which lends itself to the mood of each of the fourteen songs in a unique way and thus makes what is not a superlative album impressive for its sheer quantity of songs with memorable hooks.

Middle Cyclone develops themes of nature and dreams and in the first track, “This Tornado Loves You”, Case appears to be comparing her love to that of the path of a violent wind funnel. In a tone of desperate surrender she sings of an unrequited love. This sad mode continues in “The Next Time You Say Forever” but is brought to an abrupt halt when the roles are reversed in the standout track “People Got A Lotta Nerve”, where the narrator is now delivering a warning that she is a “man-eater” that will take “half your leg and both your lungs”.

Further along in the album the titular track follows a simple two-chord pattern making it an easy song to like, but an even easier song to quickly tire of. In contrast, the next track “Fever” is an experimental depiction of a fever dream. Beginning in 4/4 time it quickly falls into a deep sleep of 6/8 and factories and anthills. Decipherable or not, this fever dream is one of the most creative tunes of the album.

“Prison Girls” offers a groovy instrumental beneath another lyric preoccupied with dream states. “The Pharoahs” is a pop standard tune of longing with yet another application of tornado imagery, and closer “Red Tide” is also buoyed by intense imagery as a song that seeks to fend off the stench of cynicism.

Case’s alternative country-rock stylings give Middle Cyclone the feel that we’re sitting on a porch in the Midwest while neighbors chase tornadoes. And at each turn, song by song, there is a clairvoyance of impending doom. Yet the faint hope is that if one can make it to the eye of the storm perhaps there will be a moment’s peace. Those moments are found all over this album.