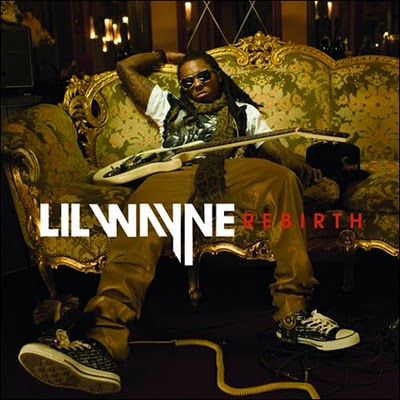 Most folks probably don’t even know that Lil Wayne released a new album last month and it’s definitely better it stays that way. After a hugely successful southern rap styled release in 2008, Dwayne Carter (aka Lil Wayne) thought it would be a good idea to venture into the late ’90/early ’00s nu metal rap-rock stylings made popular by such bands as Linkin Park and Limp Bizkit. Heavily distorted guitars and bombastic rock drums with a smattering of spoken verb unfortunately for Lil Wayne is a thing of the past.

Rebirth is a boring and trite attempt to rejuvenate a sound that needed no such resuscitation. Carter was on point with his critically acclaimed release Tha Carter III and didn’t require a foray into “fresh” territory. Instead the rock ventures of Rebirth sound like a bad demo tape, almost as if Lil Wayne sat down in front of his iMac and busted out some cheesy jams in Garage Band, then started rapping over them. The first version I myself heard was an advance copy and I genuinely thought that the final street release would exhibit loads of remastering and that many of the tracks would be left on the studio floor. How I wish I was right.

Peaking at #15 on the Billboard Hot 100, the first single “Prom Queen”, released in January of 2009, was an early taste of what Lil Wayne’s rock experimentation would sound like. That taste was all anyone needed because thirteen months later when the album finally hit stores critics across the board had already trashed the album for it’s tastelessness and flat sound. As Nathan Rabin for the Onion A.V. Club put it, “Rebirth sounds like a strange dispatch from a lost ’80s in which Wayne trafficked in cheesy power chords, cornball hard-rock atmospherics, lame guitar solos for beginners, rock clichés, and Reagan-era synthesizers.” Had Lil Wayne decided to limit his wanderings to a handful of experimental tracks, accenting an album filled with what he does best, rap over hip-hop beats, I might not be writing this article. Instead foolishly he based an entire album around something he clearly has little grasp of: an authentic rock sound.

Surprisingly, four tracks have broken the Billboard Hot 100, “On Fire”, “Drop The World”, “Knockout”, and the aforementioned “Prom Queen”. But with Lil Wayne’s star power radio play is to be expected. The only song on the entire release worth mentioning is the HIT-BOY and Chase N. Cashe produced “Drop The World” which features a re-energized Eminem. Besides these four minutes of mediocrity the remaining forty-two are an awkward and embarrassing flop.