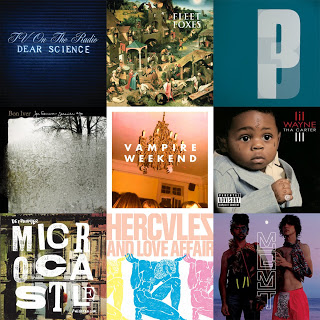 recently i realized that while i make my own end of the year award list for music, there are many other notable publications who do the same. and the odd thing is, i hadn’t heard of 75% of the artists who made their lists. being the music buff that i am i figured i should be a good steward of the industry and get informed on these lesser-known artists. what follows is my sampler for the 2008 award winning artists. to qualify for inclusion the following criteria must be met:

following inclusion, i have chosen one song from each album based upon a consensus between multiple reviewers’ favorite tracks and my own favorites. upon majority opinion this track is included on the sampler.

upon which the tracks have been sorted based upon a unique formula that attempts to rank the artists by excellence in the year 2008 as determined by multiple critical outlets. the sampler commences with TV On The Radio, who by all intents and purposes are the clear-cut best artist of 2008 with the release of “Dear Science”.

7. Deerhunter – “Nothing Ever Happened” [Microcastle]

my personal favorites from this list are Elbow, Bon Iver, TV On The Radio, Kings Of Leon, M83, and Shearwater. with special mention to Portishead and Fleet Foxes as well. my least favorites from this list (which remained included because they were either too well-liked to ignore or because they weren’t unduly vexing) are Deerhunter, Los Campesinos!, and Hercules And Love Affair.