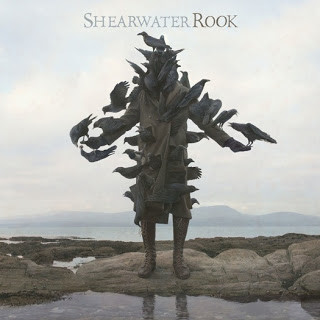 i’m through thinking of my blog as a place i can only put down digested thoughts and compositions. instead, i want to speak my mind. i want to write when i’m inspired, when i have an opinion (which unfortunately for those of you who subscribe to my blog is rather often). so that said, i have some things to put down now that i just finished listening through Shearwater’s album “Rook” in headphones on my porch.

i’m rather impressed with the album in its entirety. this is not because every song is a masterpiece or because every song is engaging. but rather, because the album maintains a continuity, a connectedness throughout, that i can only compare to Radiohead’s “Kid A” in its musical cohesiveness. the difference being, “Rooks” is unified largely by its lyrical content. the subject primarily concerns nature and what might be termed Mother Earth. now before the “i don’t believe in global-warming” folk jump on my back, it is NOT a treatise on green-living. it is more an observation of our relationship with nature. no one is on their proverbial soap-box, but no one is saying that we respect nature in the fullest. what i enjoy about the lyrics here is that they are not condemning but are enlightening. they are authentic, yet artistic, and are voiced with no hubris. it is an album in which i am uncomfortable singling out any song as a throw-away because to do so would be to sacrifice a part from the whole.

i don’t want to get overzealous here; it is NOT genius. but it is beautiful. it’s simple and concise. and as is the case with many great “concept” albums (which i prefer to call “complete” albums do to their cohesive and holistic nature) it has two excellent bookends, beginning with the haunting opening track “On The Death Of The Waters” and ending with the hopeful “The Hunter’s Star”.

i do take issue with some of the song structure and lack of repetition on the wonderful melodies found throughout that deserve revisiting, but it would be unsound to expect “Rooks” to follow conventional pop technique. further, it would be unfair to tear this album apart into singles or radio hits. when an artist is able to maintain such clarity of vision for an entire album, praise is deserved.