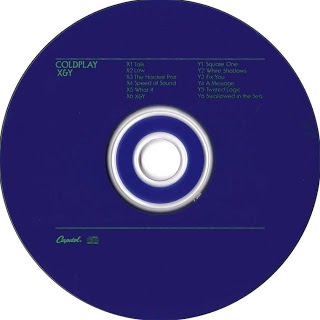 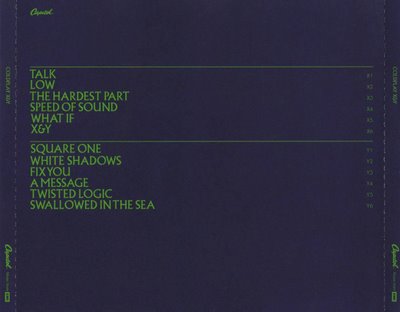 let’s travel back to 2005…
there is a release of Coldplay’s “X&Y” out there that is notable for one main distinction: it has a different track listing than the version in stores. it claims to be the “original tracking order”, and i was skeptical about this claim at first except that included with the songs are scans of the booklet and the cd itself proving that at some point this version was released. it appears to me to be more of a promotional release for the album because there is not sufficient copyright info on the booklet or cd (ie. there is no year printed).

but what is cool to note is that Coldplay attempted to separate the album into 2 discs more definitively X… and …Y. not X&Y. in listening through what i call this “original pressing” i find that i enjoy the album more with this track listing than with the one that was later released for mass consumption.

track listing is of utmost importance in an album as a whole (radiohead is great evidence to that) and there is something about making this into two separate releases that strengthens the individual songs as part of the whole.

the slow ballad “What If” now has more purpose as a wrap-up track towards the end of X, instead of as the 2nd track on the album which unmistakably puts a halt to the momentum of the mass release.

“Square One” and “White Shadows” are back to back now, which seems appropriate with the otherworldly ambient style found in both.

“Speed Of Sound” is earlier in the listing, which is better because it’s such a strong song it should be towards the front end, as most lead singles are.

…and “X&Y” is a great closer to X (and lead into Y) instead of just being that strange track that comes before the single (“speed of sound”) as it is on the regular track order.

there are numerous other contrasts to be made….

…but this/these album(s) is/are definitely better as X … and … Y.

try it out for yourself.